Clare Turner and I had a fantastic time doing the Spring, Summer and Autumn series of our Combined Training Clinics at Shepperlands in Finchampstead. A super variety of horses and riders kept all 6 of the clinics full. We had baby horses coming for the experience, ex race horses in retraining, horses and riders who are mainly dressage but like to jump for fun, unaffiliated eventers and BE competitors from Intro to International Novice. In the New Year we will plan the dates for 2012. The progress everyone made was such a pleasure to see.
Fabulous photos were taking by Wayne Jones Photography. Waynes team captures every horse and rider at their best, making you and your horse look amazing.There is a 'vibe' that comes out of his photos, they are not just visually good, you can 'feel' the photo. Wayne captures the atmosphere of the surrounding, our emotions are oozing out of the photo. I have never seen anyone else be able to do this. Magical.

Delboy has been out of work from June to October after hurting himself bucking in a trailer (celebraring his two fantastic percentages!) However all is good again now and we went to Snowball for our first outing in ages. Del was very very very excited and the quality of the tests were not in my opinion very good,  but somehow he brought home 2 red rossettes! You cant blame him having not been out for 6 months. Will get him out and about doing some horse box practice, hacking and schooling in clients arenas and he will be ready to relax and breathe in the competition ring by January!

Alfs second splint is still active but the original one has shrunk down to practically nothing! Hooray! He is a late developer for sure and his bones are still soft and growing. However he is an incredibly intelligent active little pocket rocket so its very difficult to keep him in 'light' work! 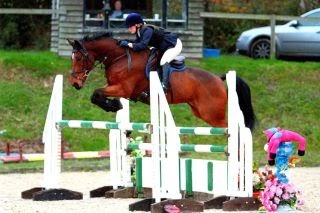 Red Alf and Del will all be out competing once a month in 2012. Bring it on!

Look how much 'rounder' Crunch is in this photo as he bascules with Ellie cleanly over the fence.This is exactly how I would describe the improvement in their flatwork. Rounder, more through the back, more self carriag....... =  bigger jumps and more clear rounds!


HAPPY CHRISTMAS AND A FANTASTIC NEW YEAR TO YOU ALL!
Posted by Tracey May BHSIT BD Registered Dressage Trainer at 11:24


September started with a bang when Beverley Wright got 80% in an unaffiliated prelim, Felix thinks he is Moorlands Totillas. Cathy Howard close behind with 76%, 5th in the end of season overall points championship AND the award for most improved rider of the season. Emily Howard and Inka won the trophy for most points at WEC this season.
Susan Jones and Mission In Motion (George to the rest of us) were Reserve Champions in the Novice Open Championship at the Wellington Area Festival. Cannot tell you how proud I am. Sue came out of the warm up test, took everything on board that Aunty said about how to improve it for the Area Championship test, then went and rode for her life. If George was a tube of toothpaste, then Sue squeezed every bit of toothpaste out there was on offer. Brilliant riding. Now qualified for the BD Winter Nationals 2012 at Hartbury!
﻿
﻿Hannah Bown and Finny won his first dressage competition since Feb and then went on to come 2nd and 1st with 68% & 73%, at their second comp, despite Finny thinking things around the arena were going to eat him in the first test!

Well done Holly Kemp at The BE South of England International, third in the BE Open Novice, finishing on her dressage score!
I rode the lovely Andalusion Relajado in two Affiliated Novices and the clever boy won them both! Thankyou Red for winning back your entry fee!
Alf got 73.2% at his first show since May 2010! Just a Prelim this time, Novice next week. But lets say he definitely needs to go back to Checkendon to school past those jumps outside the arena! Naughty spooky nappy pony! However he had grown up by his second comp and at his first Affiliated Novices, behaved like a star and for the first time in his life didnt put a foot wrong. Maybe he's ill?!?! We had to go 'HC' as needs to wear front boots at the moment until second splint has calmed down, but he got top scores in both Novices. Very happy.
﻿﻿
﻿﻿

In preparation for Mercurys four dressage tests at the BRC National Championships in a couple of weeks time Anni Denton did three tests at the weekend. They won all three of their classes N24 (67%), N36 (68%) and E43 (67%). So proud of my superstars
Anni got over 70% in the Open dressage at the RC Nationals and was on the winning National Rural Riders Test, who won by 36 points!
Very well done to Clare Grant and That Scallywag Prince for coming 9th at the Great Bookham Dressage Champs. 8's for the trot work and 7's for the much improved canter transitions
How cool are these results from BE South Of England 1* International Novice


Im so proud to tell you that Laura and Vardigo also won the Goring U18 BE Novice!
Future British Team Selectors take note. Laura has arrived!
Yippee! Ellie Lloyd Jones and Crunchie won Munstead BE100 with a 28.5 dressage! Happy Aunty. I had a tear in my eye a few weeks later watching the video of Ellie doing her first BE Novice! 6th place after the dressage with 31, same dressage score as Lucinda Fredericks and only 1 mark behind Rodney Powell. Well done Ellie and Crunch!
Posted by Tracey May BHSIT BD Registered Dressage Trainer at 13:35