In January clever Delboy went to his first show since his tooth root op last November and won both classes at East Soley!
70.38% in Novice 35 and 65.71% in Elementary 57. My fault that % is low for Del. I had been practising some sitting trot and had 'reduced' the trot so as to allow for my core to cope! I then hadn't ridden as big and forward as i normally would in the ring, so a comment of 'needs more ground cover' from judge Lindsay Jenkins, although a comment never normally applied to Mr Del, but quite right on this occasion.

It started snowing whilst at a show the next day with Alfie. Very apt as we were at Snowball Farm! Alf was determined not to be outdone by his brother so he won both his classes too! Four red rossers in two days!68.4% in Elementary 44 and Alfs first 70% in Elementary 49! Would have been more if i hadnt forgotten the 20m circle canter stretch at the end. To be honest I was just so grateful by that point that he hadn't fallen over with the amount of snow that had balled up in his feet that i was just looking forward to getting to the final halt safely. 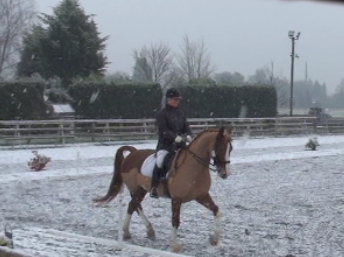 I also took my client Sara Malpass with me to ride Logan at his first Affiliated Dressage. He went HC so as to not yet gain any points but Sara would have won both of the Novices. What a day!
It looks beautiful in the picture and on the videos but oh boy were we cold!﻿﻿﻿﻿﻿﻿ 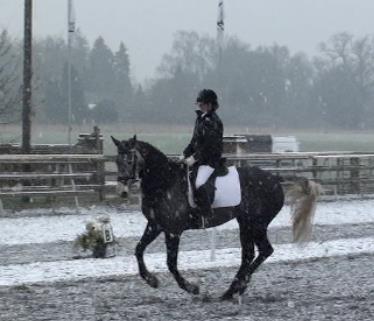 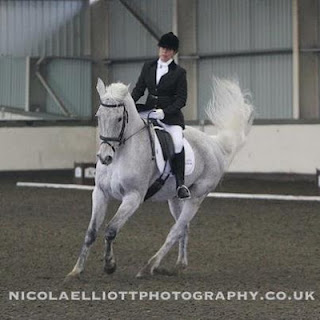 I am so proud of Gillian Hammond and her event horse Cuddles for coming 2nd in their Prelim at Wellington.
Gill has been working so hard over the winter on her dressage and jumping to prepare herself for the rapidly approaching BE season.

This rosette in a dressage competition is just what she needed to give her the boost that all her hard work is paying off.

I love this picture because Gills position is good with her weight down into her inside leg and it shows how she is training Cuddles to be able to work in an uphill frame,but with his back up as well as his poll up.
Look at that amazingly white tail! How does she do that?!

Posted by Tracey May BHSIT BD Registered Dressage Trainer at 13:55